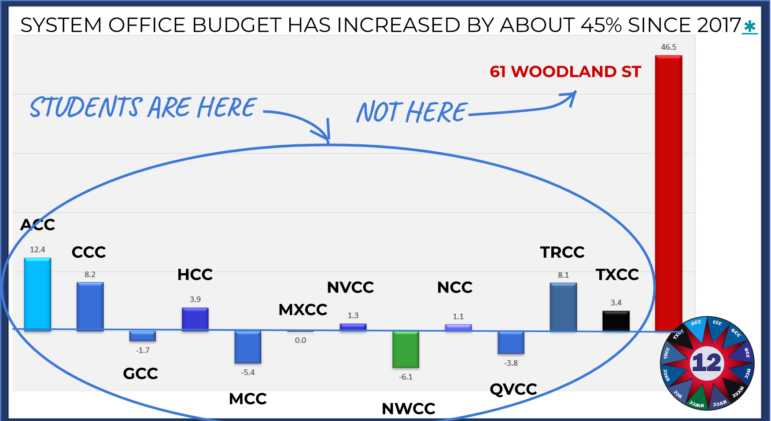 In December 2017, as the Connecticut State College and University system office was preparing its “Students First” consolidation plan, the system’s Faculty Advisory Committee presented an extended critique of the proposal.  It was not supportive, recommended other paths, and contained the following warning:

“We believe that there is a risk, which is greater than zero, that the effort to work through the transition will result in such dysfunction and cost overruns that, several years from now, we will be tasked with putting the 12 institutions back together again.” –FAC comments to the BOR Dec 2017, p.5

Two years later, we are now watching this excruciating and expensive possibility play out.  What’s worse, we have been tasked with facilitating it.

System Office Expenditures have grown by 45% in the last three years.

Our accrediting body (NECHE) described the plan as “unrealistic” twice in its response to CSCU’s March 2018 application and failed to approve the request:

“Because of the magnitude of the proposed changes, the proposed timeline, and the limited investment in supporting the changes, the Commission is concerned that the potential for a disorderly environment for students is too high for it to approve the proposed Community College of Connecticut as a candidate for accreditation based on the Students First proposal.” —April 25 2018 response from NEASC (NECHE), p.3

And yet, the system office has insisted on moving forward with this plan…

Read More in the CT Mirror

CHARTS THAT WILL BLOW YOUR MIND!