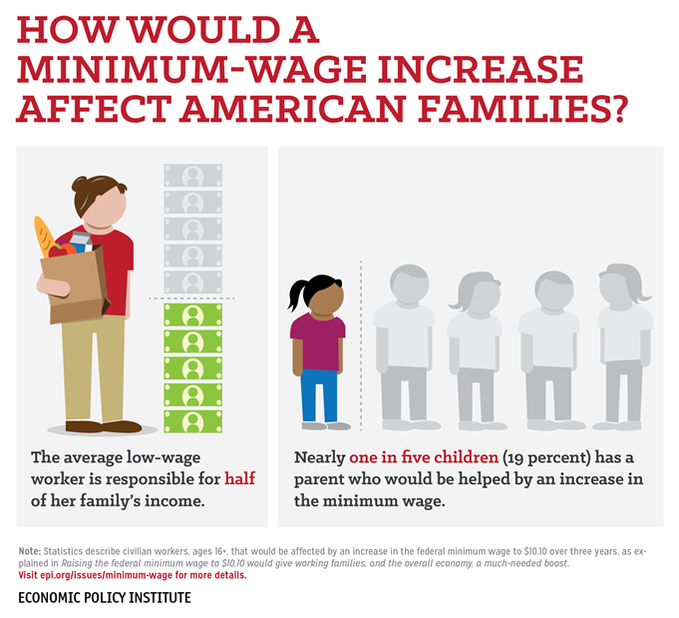 The federal minimum wage was established in 1938, as part of the Fair Labor Standards Act (FLSA), to help ensure that all work would be fairly rewarded and that regular employment would provide a decent quality of life. In theory, Congress makes periodic amendments to the FLSA to increase the federal minimum wage to ensure that even the lowest-paid workers benefited from broader improvements in wage and living standards.

Yet for decades, lawmakers have let the value of the minimum wage erode, allowing inflation to gradually reduce the buying power of a minimum wage income. When the minimum wage has been raised, the increases have been too small to undo the decline in value that has occurred since the 1960s. In 2016, the federal minimum wage of $7.25 was worth 10 percent less than when it was last raised in 2009, after adjusting for inflation, and 25 percent below its peak value in 1968.

This report begins by providing historical context for the current value of the federal minimum wage and the proposed increase to $15 by 2024. It then describes the population of workers likely to receive higher pay under an increase to $15 by 2024, with detailed demographic data that refute a number of common misconceptions about low-wage workers. The report concludes with a discussion of the provisions of the Raise the Wage Act that would index the minimum wage to median wages, and gradually eliminate the subminimum wage for tipped workers.

This report finds that:

Spending Cuts and Trickle Down (On) – DO NOT WORK