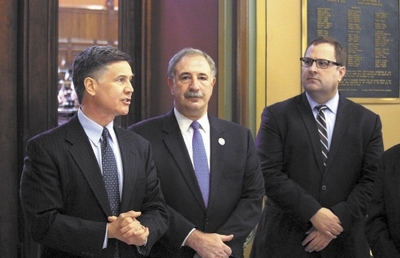 For the past decade, Democratic U.S. Rep. John Larson has regularly lobbied Congress to pass a nationwide tax on carbon emissions, something that had been supported by former Vice President Al Gore.

But the tax, which Larson sees as a way to slow climate change and generate economic benefits, has never gained enough support in the face of political opposition.

Now, lawmakers in Connecticut and two fellow New England states are trying to take matters into their own hands.

Bills before Connecticut, Massachusetts and Rhode Island legislatures would create the first state-level carbon taxes in the country and they're garnering intense opposition from businesses, which say the levy would drive up the price of electricity, natural gas, heating oil, gasoline and propane.

As written, Connecticut's proposed $15-per-ton tax on the carbon emitted by various fossil fuels could generate more than $500 million in the first year, based on 2014 emissions data. That figure could more than double by the fifth year, as the bill allows for annual $5-per-ton tax hikes.

The tax, or fee as some advocates call it, would apply to electricity and natural gas suppliers, including utilities, and virtually every power plant in the state. It would also impact properties — including those owned by manufacturers, universities and hospitals — that have on-site gas-fired combined-heat-and-power plants. READ MORE