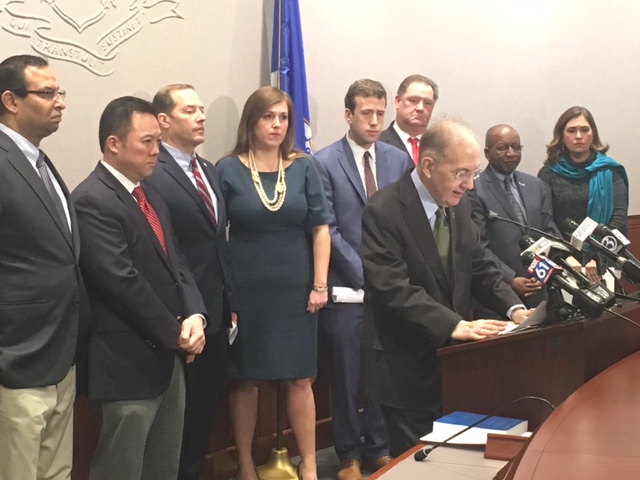 With Trump as inspiration, anti-bigotry bills are partisan

Farhan Memon, state chairman of the Council on American-Islamic Relations, stood with U.S. Sen. Richard Blumenthal to denounce President Trump’s travel ban Thursday as evidence of anti-Muslim bigotry. Then he hurried across the Legislative Office Building atrium to join state legislators in their call for an expanded hate crime law in Connecticut.

In its most recent report, the FBI says hate crimes against Muslims jumped 67 percent in 2015, the beginning of a presidential campaign season in which immigration, especially by Muslims, eventually became a central issue, including Trump’s call on Dec. 7, 2015, for “a total and complete shutdown of Muslims entering the United States.”

The Anti-Defamation League (ADL) of Connecticut says incidents of bias directed against Jewish institutions, including vandalism at cemeteries and bomb threats to Jewish Community Centers and schools in West Hartford, Woodbridge and elsewhere, rose sharply during 2016 and have continued into the New Year. READ MORE