Why are so many women dropping out of the workforce? 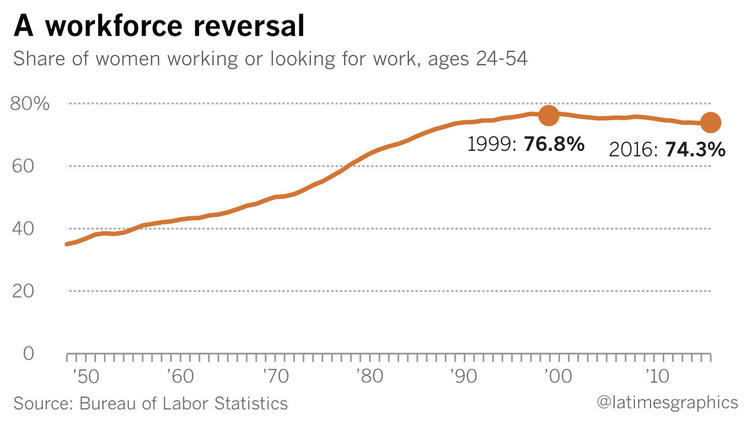 Mari Villaluna never wanted to be a stay-at-home mom. The 36-year-old spent a decade building up a resume as a career counselor and tutor in San Francisco schools after serving in the U.S. Army.

She made about $42,000 at an employment agency, and was regularly sought out by potential employers. After she gave birth to her first child last year, she drew a star on her calendar to mark the day she was supposed to return to work.

“I had a very established career,” Villaluna said. Then, in September, her plan to get a state subsidy for child care fell through, and the single mom couldn’t afford to spend thousands of dollars on private day care. The day she gave up her beloved 9-to-5 job, she cried for hours.

Villaluna’s decision offers a clue to an economic mystery: Why are American women disappearing from the workforce?

The answer could have stark implications for future growth.

For half a century after World War II, women barreled into the job market in numbers that surged higher every year. They drove most of the rise in real household income for decades and boosted the economy’s total output at a time when men were dropping out of the job market.

Then, all of a sudden, they stopped. Since 2000, the share of women working in their prime earning years has declined.

Connecticut Is A Model For Ending Homelessness