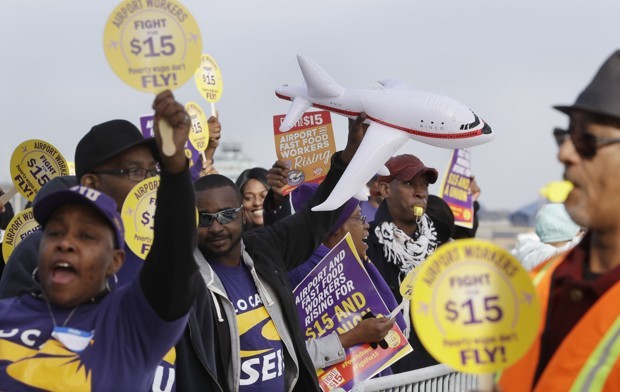 What Happened When 18 States Raised Their Minimum Wage?

Earnings rose, but not at the cost of employment.

The biggest argument against raising the minimum wage is that it’s going to end up cutting jobs. By having to pay each worker extra, the cost of producing goods or services will increase. So, the argument goes, employers will either pass that cost off to customers (by raising prices) or try to find savings elsewhere (by investing in equipment rather than workers, or reducing the hours their employees work). Either way, the total demand for labor will drop.

But this explanation is based on a pretty simplistic, static conception of the labor force. And other economic models have offered alternate conclusions. “The ultimate test,” of whether it helps or hurts, however, “is not theoretical conjecture, but evidence,” writes David Neumark of the San Francisco Federal Reserve. And the folks over at the The Center for Economic and Policy Research have provided just that.

They recently summarized an analysis by the White House Council of Economic Advisors (CEA) on the effect of raising the minimum wage above the federal minimum of $7.25. By analyzing the 18 states (plus D.C) that had hiked minimum wages after 2014, the researchers arrived at this conclusion: In those areas, the low-income workers who are supposed to benefit from a minimum wage hike did, without any collateral damage. READ MORE